D. Y. Patil Education Society is established in the year-1987 with the mission to provide best quality education in the area of health sciences comparable with the best institutions in the world.

After almost two decades of work as an affiliated Medical College, earlier of Shivaji University, Kolhapur and later of Maharashtra University of Health Sciences, Nashik, based on excellent and constant academic performance, a very strong and aesthetic infrastructural system, efficient and transparent governance and distinct potential for future progress , the department of Secondary and Higher Education, Ministry of Human Resource Development, on the recommendations of University Grants Commission under section 3 of UGC act of 1956, vide its resolution No. F.9-26/2004-U3 dated 1st September 2005, has accorded the University status to D.Y.Patil Education Society consisting of D.Y. Patil Medical College with immediate effect.

Kolhapur is popularly known as Dakshin Kashi the residence of mother Goddess Mahalaxmi – Ambabai. It is also the seat of Southern Maratha Empire famous for Rajarshi Chhatrapati Shahu Maharaj, a progressive King widely venerated as Lokraja. Kolhapur city is situated at a distance of about 400 km from Mumbai. It is well connected with various parts of the country by railway, road and air transport. The climatic conditions of Kolhapur are moderate. Kolhapur is highly industrialized, city of culture, literature, education and sports surrounded by a rich agriculture. It has the rich tradition of arts and sports. It has the distinction of the birth place of Indian cinema and is a globally known wrestling centre. The Medical College is situated in Kasaba Bawada area of Kolhapur city. The College and the University office is about 2 km from Kolhapur railway and Bus stations. Local Public Transport and autos are available to reach the University office. 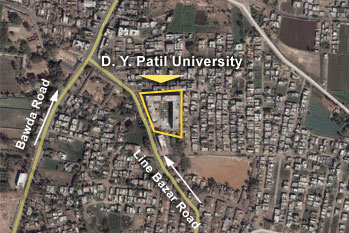